Agroforestry is the deliberate culture of perennial woody plant species interacting ecologically or economically with seasonal cultivations and /or animal breeding. We can classify the different agroforestry practices by means of structure and function criteria, both with respect to time and space, taking account of the specificities of Ishpingo foundation.
There are actually 5 groups: 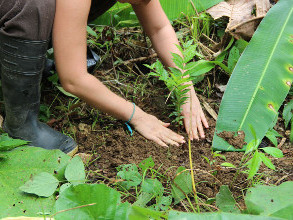 Crops under tree cover within which trees have multiple ecological functions such as : shading, input of fertilizer, additionnal production (timber, fruits).
The linear arrangement techniques such as : windbreak systems, edge plantations, hedgerows to control the animals, anti-erosion wood bands and lane cultures.
Complex agroforestry systems (also called agro-forests) corresponding to a multiple layers association of trees and seasonal crops.
Sequential agroforestry techniques when the interaction between trees and crops lasts a long time, for example when the space in between trees of timber forests is used for agricultural purposes during a few couples of years.
Minor agroforestry techniques which regroup all that can’t be classified within the 4 groups described above such as : sylvopasture, aquaforestry, entomoforestry and other side agroforestry techniques

#2 The merits of agroforestry

Ecological interactions in agroforestry are complex. Yearly and perennial crops can be complementary or in competition with one another. Their type can differ over time depending on environmental conditions. It is necessary to consider these interactions to properly choose the right associations of species and the way the cultivation is going to be run. 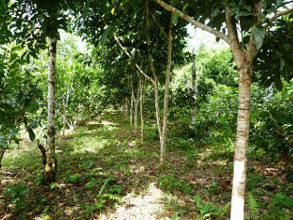 A complex agroforestry system provides a great variety of products intended to market sales or family consumption. Hence, that system is more resilient to market fluctuations and provides a better food autonomy. Moreover it demands regular work spread through the year unlike monocultures.
Rural areas in Ecuador lack access to the financial system. Hence, having lumber species in a farm can be considered as savings that can be used to invest or to cover an occasional financial need.
In addition to this economical concern, the presence of trees within crops leads to biomass production and enables nitrogen fixation which is extremely important for poor grounds. It also facilitates water drainage and soil erosion.
Ecosystem wise the trees contribute to regulate wate cycle and allows carbon capture and storage mainly responsible of global warming. However to be able to associate annual crops to those trees, they have to provide diffuse shade and be deep rooted. 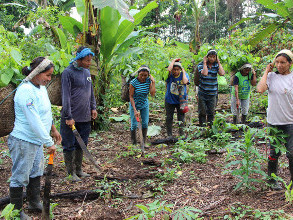 We could count up to 4 dozens of different species on ¼ of an hectare. Usually a same plot was cultivated during 2 or 3 years. Then followed a fallow phase that could last up to 10 years. After this long period the soil got fertile enough and a production cycle could start again.
However the quick progress of pioneer front zones, economical development, population growth and drop in coffee and cocoa prices at the end of the 80’s were all factors that led to a gradual replacement of traditional agroforestry technics by monocrops or short-cycle cultures.
Nowadays the chacra can still be seen within the majority of kichwas’ farm but the nature of the plant species discribed above tends to be replaced by cash crops. These deep modifications of the culture system lead to increase the needs of specific products (food, building materials, medicine) resulting in overexploitation of the ressources, deforestation, erosion, soil fertility reduction and loss of biodiversity.

Ishpingo proposes to kichwa farmers a sustainable and ecological agroforestry system which is economically profitable. The success of that system lies in the cultivation of a large number of usefull plant species and in the optimization of farms surface.

The different agroforestry systems we propose are following : 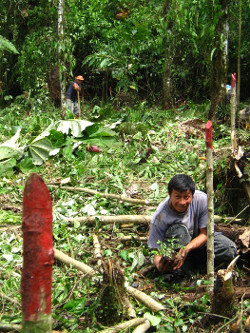 First it can be a plot including subsistence crops or cash crops.
In this system trees are planted in lane, you have to switch between one species to one another every 5 meters.
During growth of the young trees, farmers can still continue cultivating subsistence crops such as corn, rice, cassava or plantain banana. After 5 years the young trees form a forest cover.
Heliophilous species can now be switched for ombrophilous ones that offer high added-value (medicinal plants or used for handicraft).
Farmers can also plant trees in already existing cocoa plots but in this case the trees should be spaced by at least 20 meters.
There is another way to educate and motivate local populations to reforest their plots without reducing the exploitable agricultural land surface : you can define farm land parcels.

Plant species utilized :
1) Expensive timber species which are about to disappear such as Swietenia macrophylla (Bigleaf Mahogany). The growth speed of this species is slow so the exploitation can start far in the future. 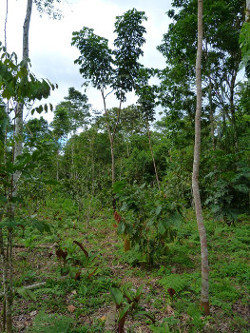 2) Half-hard timber species presenting an average growth speed such as Cedrelinga cateniformis (tornillos). Exploitation of those trees can start after 40 years. 3) Softwood lumber species presenting a fast growth such as Schizolobium parahybum (yellow jacaranda). Exploitation of those trees can start after 20 years. 4) Fruit tree species already cultivated or underused such as Ocotea quixos (Amazon cinnamon). 5) Medicinal plant species such as Myroxylon balsamum (balsamo) and Croton lechleri (dragon blood), both presenting wound healing properties, and Siparuna macrothepala which can be used to brew repellent cream for insects. 6) Plant species utilized for handicraft purposes such as Phytelephas aequatorialis (vegetal ivory) or Geonoma sp. (fiber). 7) Cocoa trees (Theobroma cacao), most common cash crop in the area. 8) Palm tree species which are very versatile (fruits, construction, palms to build roofs, handicraft, oil…) as well as presenting a small crown. 9) Leguminous species such as Inga sp. to enrich the ground fastly in nitrogen and organic material. 10) Other kind of tree species that present very specific properties such as rubber trees (Hevea guianensis).

The agroforestry models we propose to kichwa farmers are based on a combination of traditional amazonian agroforestry techniques and experimental agroforestry plots done by South-America science stations during the last 20 years.
Those models aim to replenish a vegetal formation close to primary forest in which every single plant has an economical or a self-consumption purpose.
Nevertheless the biodiversity of an agroforestry system is low compared to primary forest. In a region where wild grounds colonization is constant, those “optimized forests” must reduce the pressure exerted by indigenous populations on the forest by providing wood and other wood products. 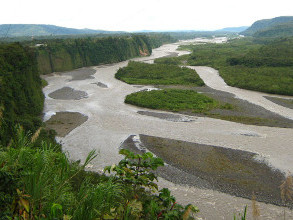 Therefore agroforestry plays an indirect but key role in preserving biodiversity of the amazonian basin. Furthermore it helps to replenish a sufficient forest cover to maintain the global mechanisms of the Amazon (water cycle and carbon capture).
In South-America agroforestry systems aren’t currently widely used because national policies favor free access to natural ressources. For the big landowners it’s economically more attractive to set up an intensive agricultural production (coffee, cocoa, bananas, sugar cane). However the drop of in the price of farm products that happened in the 90’s combined to wood price increase caused by the reduction of global forest resources, might encourage those landowners to switch to agroforestry. The development of a carbon market with industrialized countries everybody talks about may as well contribute to democratize agroforestry projects.