We’ve created an association of more than 100 organic fruit producers and we buy them the harvests coming from reforested plots at fair prices.

9 years have passed since we began to help the local populations of Tena to reforest their plots with fruit trees. A complete inventory of the agroforestry plots we supervise allowed us to notice that some fruits were produced in sufficient quantity to consider selling them.
To achieve this purpose we studied in 2016 the ability to set up a sales channel for each fruit species. 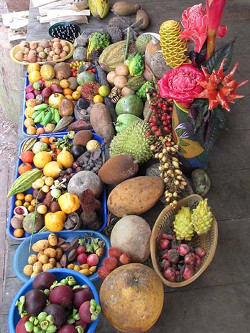 Through that study we managed to identify the 9 fruit species presenting the best sales potential.
We are now able to distinguish the fruits that are going to be sold directly (such as orange, key lime, mandarin, sapote, ramboutan and salak), the fruits intended for processing into frozen pulp and jam (such as araza and guayabilla), the other plants intended for processing into essential oil (such as Amazonian cinnamon also known as ishpingo in kichwa language). The rest of the fruits coming from reforestation is for self-consumption.
2016 was a busy year. In addition to the market study about the fruits, we created a producer association. This marks a new trend in the activities of Ishpingo foundation. Indeed we are trying to get a more global approach by setting up a fair trade cooperative and this association of farmers is its corner stone.
It represents not less than 112 farmers who have already participated to at least one of our agroforestry projects that included fruit tree plantation. This organization aims to pool the production in order to increase the volume of fruits thus facilitating the sales process.
Since the necessary administrative formalities have been carried out with the IEPS we can officially say that this structure is a legal one. It depends directly on the Ministry of Economic and Social Integration of Ecuador.

#2 Structuring the association and train its members

Since the association has been recognized as a legal structure we have started a major structuring work. We have been training the local producers to the reality of the market and the necessary transparency one has to comply. We also have been helping them to comprehend the supply chain system we have to set up in order to buy fruits in good conditions. One of the most important knowledge we have been trying to pass on are the proper harvesting methods to get top quality fruits. 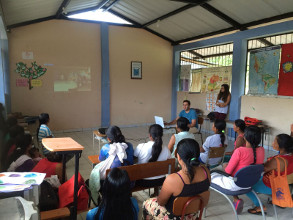 In order to help the farmers to get a longer-term vision on how works a flourishing fair trade business, we decided to bring 25 of them to Salinas de Guaranda. This city of the Andes has set up since the 70’s a sustainable economic model based on the collaboration of several fair trade cooperatives.
To improve the production efficiency of the farmers, Ishpingo made the choice to focus on 9 different fruit species. 10,000 young shoots were distributed in 2016 and 10,000 more in 2017. Each of the 112 farmers members of Ishpingo foundation received approximatively 150 trees in addition of what they already had on their plots. Do not misunderstand, the prime priority of Ishpingo still is reforestation. However after 12 years we learned that our actions can be successful only if we manage to get an unwavering support of all reforestation actors. The people involved must make a profit from farming their agroforests. If they can’t then it is almost impossible to turn them away from intensive farming and mono-culture which are two major causes of the Amazon deforestation.

The fruit producers association we planned to set up is finally up and running. It now regroups 112 farmers but we should reach 200 next year.
We began to buy fruits and leaves of 6 different species in 2017 from 40 farmers for a total volume of 3.500kg corresponding to a market value of 4.500 US dollars.
We sold the fruits (lemons, ramboutans and salaks) to frsh markets without any benefit in order to give the best possible margin to the farmers. We expect that processed fruits products such as pulps and jam will be the main source of income for the Ishpingo selling structure. Its purpose will be at least to offset operating costs since we sell raw fruits at cost.

We also bought around 1 tonne of Amazonian cinnamon for 500 US dollars in order to produce essential oil and to give out free samples. We finaly manage to make a first commercial sale to a Japanese aromatherapist who was impressed by the quality of the oil.
Volume are still low but anyway this is a promising start which provides a lot of motivation to the farmers. Indeed we have calculated that those activities allow an average 10% increase in incomes for the 40 farmers who sold us their fruits. It also represents a 4.500 US dollars turnover for Ishpingo. Since the beginnong of 2018 we have been continuing to buy fruits as well as developing customer loyalty in order to increase volume of sales. In view of these promising results, farmes are inscreasingly motivated to practice reforestation.
It is important to note that the organic sector is not currently valued in Ecuador. Consequently we have to bring the prices of our organic fruits in line with the prices of fruits grown with chemical inputs. Therefore setting up an organic sector is a major challenge for us in the following years.
To achieve this ambitious goal we have already begun to teach the good agricultural pratices to the local farmers as well as raising awareness of local customers. We want to encourage them to be concerned about the quality of food by placing the fruit as a medicinal product in its own right.